An inflatable colon, medals, and a tonne of port-a-loos... What has Eric been up to?

If you’ve never heard of Crohn’s or Ulcerative Colitis, I can’t say I blame you. It’s quite a “hidden” disease which isn’t often publicised or talked about, and it’s very misunderstood. Symptoms are very unpleasant and include inflammation and ulceration in the gut, bloody diarrhoea, cramping/abdominal pain, chronic fatigue, and joint inflammation to name a few.

Crohn’s and Ulcerative Colitis are the two main forms of Inflammatory Bowel Disease, often referred to as IBD. Not to be mistaken for IBS!

In less than a year, I’ve gone from being a complete novice to semi expert when it comes to details of IBD. This is due to my girlfriend, Rebecca, being diagnosed with Ulcerative Colitis in August 2016 after suffering with symptoms for quite some time. It came as a massive shock to us both, to be told she has an incurable auto-immune disease especially when we had never heard of the disease before!

After months of researching; she received a lot of help from the charity, and was nudged to join the various support forums on social media. She felt comfortable enough to be able to confidently talk about her daily battles, or accomplishments, with people who are also suffering from the disease. One day I received a text from her that the charity was running an event for IBD. It was called “Crohn’s and Colitis Walk it 2017” and was going to be held in Leazes Park, Newcastle upon Tyne.

We paid our donation for a space in the event, and our charity t-shirts. Then set up a just giving page, any donations we received would go straight to the Crohn’s and Colitis UK charity.

On the 27th of May, Rebecca, our dog Daisy and myself, were raring to go. When we arrived, we were stunned at how many people had turned out for the event. It was a real eye opener to see how many people this disease affected. Not just sufferers of the disease but loved ones, friends, family, employees, colleagues, and even dogs were out in full force.

It was a lovely sight to see.

Part of the experience was an inflatable colon! It was a nice touch to try and teach the younger generation about the disease at an early stage of their life. Informative, and fun! 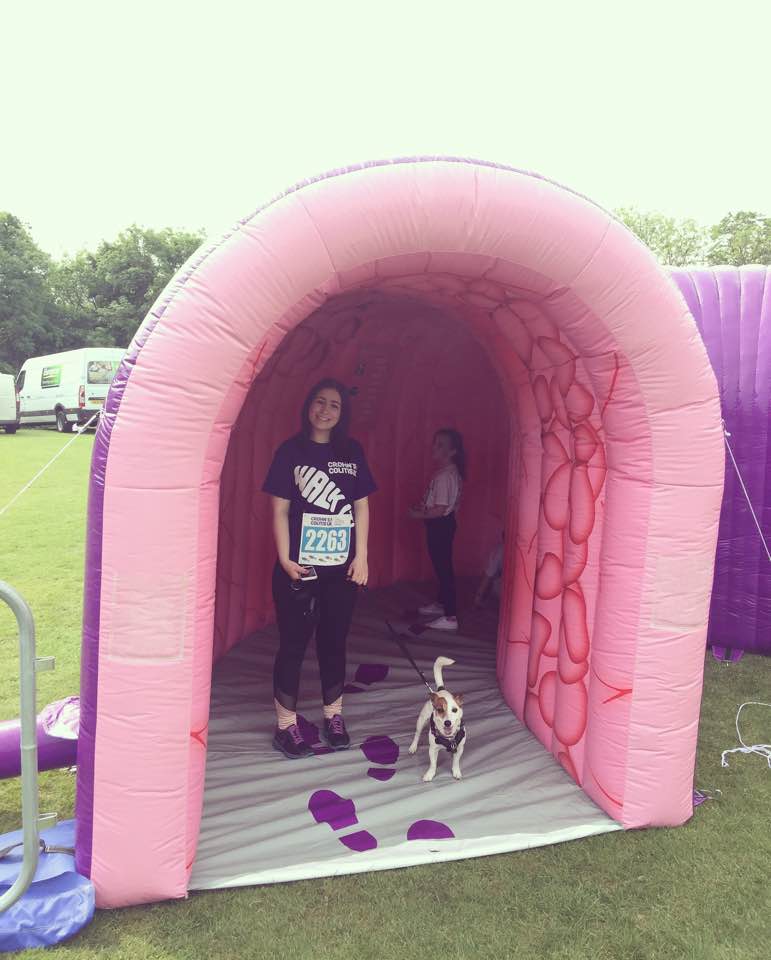 The famous inflatable colon. Featuring the lovely Becca and Daisy!

They had a lot of activities there for children, and the host of the event was hilarious. She was very nice and kept everyone laughing, which made the event even more of a delight to be a part of. A quick note; Whoever was the planner of the event, well done for ensuring there were plentiful port-a-loos, considering what the charity walk was for…!

It was a gloriously hot day, and I can say with certainty that it was very social event; especially when we all walked down Newcastle’s main street - Northumberland street, with our purple t-shirts on! We even got a few people to walk along with us. Result! As we approached the finish line, the fundraisers and volunteers of the charity applauded us with enthusiastic cheers. We were even given a medal and a bottle of water on completion.

It was a great day and I’m proud to say we raised £135 from friends and family. And as of today, the charity has raised £254,742! 73% of its target. This is going to help the charity fund much needed research, raise awareness and give support to those affected by Crohn’s or Ulcerative Colitis.

So, I hope I’ve informed you a little about the disease, and shown the good that Crohn’s and Colitis UK does. Who knows, I could see you next year with our matching purple tees inside the inflatable colon…

Our Eric and Becca post walk, look at those medals!