I recently attended the Radiocentre's Tuning in Event in Leeds. At the risk of being labelled a sycophant it was marvellous, and I would encourage all to attend when one arrives in your area – alternatively travel!

Obviously, there was some blatant selling from some senior industry figures ( and why not!?!?), some interesting industry developments and then the best bit Mark Barber's presentation on Brexit!

Yes – an actual presentation on Brexit that was both interesting, informative and that didn’t leave me hanging at the end wanting to ask more questions. I got all the info and I was satisfied with the conclusions drawn as a result of research post the last two major UK/Worldwide recessions.

I make no apologies and will indeed credit Mark for the rampant plagiarism that will now ensue in the preparation and sharing of this piece.

Whilst I don’t profess to know, have a crystal ball in relation to what will happen growth wise to our economy over the next 12-18 months – I think we can be confident that the growing uncertainty caused by Brexit is unlikely to have a positive impact on UK plc.

On the basis that ad spend is intrinsically linked to how the economy is performing – we need a plan! Or at least some evidence to back up our strategy.

So here are the three ideas based on facts and research that can help us all in the event of a significant downturn.

1.Make the case for continued investment

The advertising budget is often the largest discretionary element of a company’s expenditure and can be the first place to look when budget cuts are in the air. 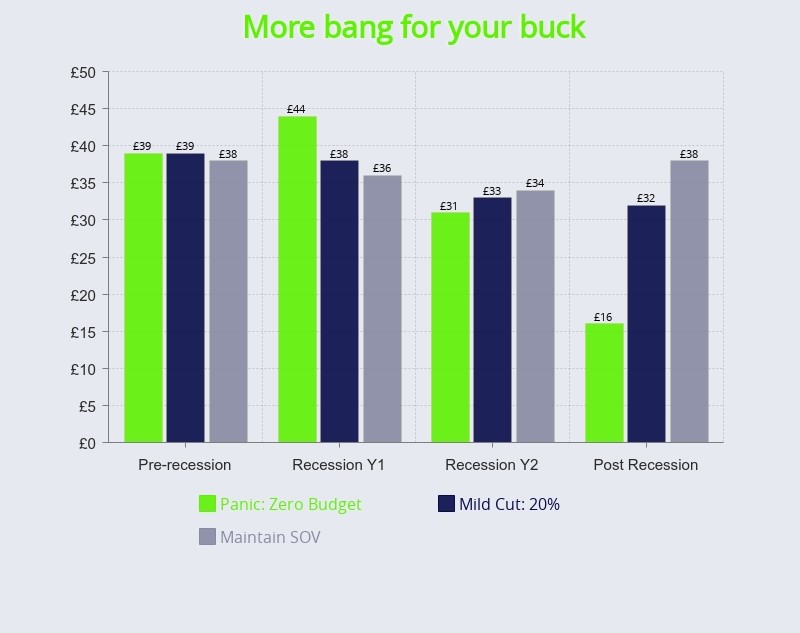 This chart, using modelled IPA data, shows the likely impact of changes to marketing spend on the annual profitability of a brand during and after a recession, based on different budget scenarios.

As you can see, for the panic scenario which cuts all ad spend during the recession, the short-term improvement in profitability is rapidly overtaken by a severe decline, becoming acute in the third year when the marketing budget is restored.

In the case of a milder budget cut of 20% for two years we see a similar but less severe pattern. However, the brand still emerges from the downturn in a considerably weaker position in terms of profitability

The final scenario, where advertising spend is sustained to maintain share of voice in line with the brand’s market share, shows that the cumulative profits generated over the three-year period greatly exceed both other cases despite a disadvantage in the first year.

But what if circumstances dictate that advertising budgets must be reduced yet you still have daunting sales targets to meet?

In this instance, it may be possible to adapt your media mix to make it work more efficiently.

And, I hope this won’t come as a big surprise to you, radio has qualities that can really help here. 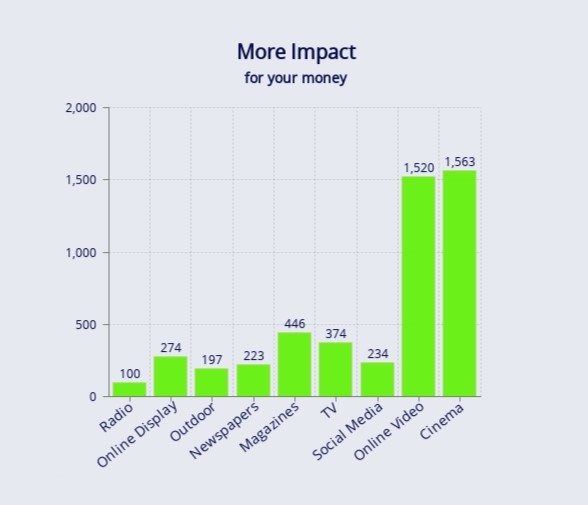 For every pound you spend on radio you’ll be buying at least twice as much audience as you will in any other medium. Or, for example, up to 15 times as much when compared to online video.

But more importantly for advertisers marketing in a recession, Ebiquity’s recent independent econometric study shows that radio really delivers on the bottom line.

This is especially true in sectors which have a greater focus on shorter-term results such as retail, where radio delivers the highest profit ROI of any media, paying back over £3 profit for every £1 spent

This ROI efficiency of radio means that it can also have a powerful effect on OVERALL campaign ROI.

As this analysis from Holmes and Cook demonstrates, total campaign ROI grows as radio’s share of the budget is increased, peaking at around 20% share where returns are 8.5% higher.

It may not sound like a lot but if you’re an advertiser spending around £3m per year that’s an extra £1m added to the bottom line purely as a result of moving money from other media to radio.

3. Keep an eye on the longer term

So, shifting money between media can help offset a reduction in your budget - and help to deliver sales goals.

But even with greater focus on short term activation it is still important to keep one eye on the future.

Binet and Fields’s latest analysis of the IPA Databank from October 2018 highlights the importance of achieving both brand AND activation effects – campaigns that do both achieve 60% more large business effects than those that just focus on activation.

That’s because brand communications create enduring memory structures that increase the base level of demand and reduce price sensitivity. Sales activation triggers these memories and converts them efficiently into immediate sales.

But these tasks can pull us in opposite directions: brand building argues for emotional advertising; whereas activation requires rational behavioural prompts.

To unlock these broader effects, advertisers can benefit by developing distinctive brand assets such as voice or music, which can then be deployed consistently over time and across multiple media to underpin campaigns promoting different short-term deals.

This isn’t just about big brands – all advertisers can benefit from using this approach.

As already mentioned, I would like to thank the Radiocentre and Mark Barber in particular for the insight and evidence.

If you would like to explore for yourself how shifting budgets between media can help your campaign deliver a better return on your investment, check out the Campaign ROI calculator in the tools section of the Radiocentre website www.radiocentre.org – or alternatively give me a call.